Do Or Do Not ... #atozchallenge letter D

My theme for the 2017 AtoZ Challenge is "Daily Thoughts".

Each day I will post a thought that comes to mind. The first word of the thought will correspond with the letter of the day.

So here is my thought for the letter D 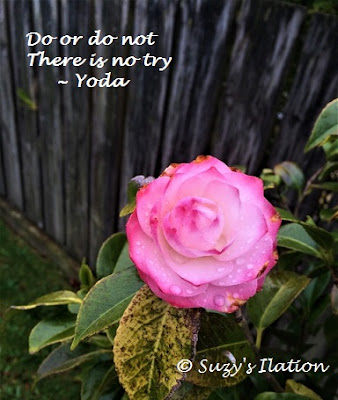 Camellia from my garden

I have often pondered over these famous words from Yoda.  At first they made no sense to me. After all isn't trying a good thing?

The more I thought about it the less and less sense it made and then eventually I stopped thinking and deciphering. But today I'm going to give it a go and voice my thoughts. For so long I've been in the "do not" phase. Today I will "do".  Perhaps I stopped "trying" because the  very act of trying implies that we are ready for failure, that we can give up in an instant.

Each year during Spring, the flowers in my garden bloom. Some plants have many flowers, some have few. The flowers either bloom or they don't. There is no trying for them.  Nature is so intelligent.

I've been suggesting to my son that he should learn to cook particularly if he wants to live overseas. For a long time his swift answer was a firm no, a definite "do not". My coaxing him into "trying" was of no avail. Then two weeks ago, he just decided he was going to learn, a definite "do". Last week he made a very yummy mince curry. This week it's pizza.  Perhaps he needed to be in the frame of mind where failure was not an option and where he simply wanted to do.

I guess it's similar to driving. Once you are behind the wheel of the car, you simply do. Trying is too dangerous an option. Imagine if the pilot of the plane you are travelling in thought that day that he was going to try and fly the plane. I'm thankful they do or do not.

Do you think there is wisdom in Yoda's words? Share your thoughts in the comments below.

Sometime ago I wrote a Star Wars poem with a Vendantic twist. While it has no bearing on this topic, I thought I would share it just for fun. For an explanation of the poem, see my post 7x7x7x7.


Jedi Master Yoda - is "yoddha", a warrior of the East

Qui-Gon Jinn with qi-gong - keeps his mind in Peace

Padme is the lotus,  the one he loves so dear - She was the jewel in the Jedi's heart, now Darth Vader who we fear

Luke Skywalker battles with Jedi in his soul  - with love he changes Vader, the great Jedi unfolds.

And so Vedantic Wisdom, the basis of it all - translated into Star Wars, the ancient force lives on.


Teaser for the letter E :  Expectation can ...

Written for the #atozchallenge drop by and check out some awesome posts.