This wasn't as easy as I thought it would be but eventually I made a list and then culled back to the 7 that my heart truly rejoiced with.  And as I closed in on my 7, I was surprised that all 7 turned up in my beloved and beautiful homeland of India.

I've always wondered what it must've been like to live in the times when the Gods walked the earth. And since I won't have the pleasure of experiencing that in this lifetime, the next best thing would be to visit the places where they lived and perhaps imagine myself in that time.

There is no particular order to my journeys, but as I'm also linking this post for the letter G at ABC Wednesday, my first is a Lord Krishna Yatra (pilgrimage or journey).

Lord Krishna was the 8th avatar of Bhagwan Vishnu one of the three Supreme God's in the Hindu religion.

Lord Krishna also lovingly known as Gopala (protector of cows), Govinda (one who enlivens the senses)  was born in Mathura and spent his childhood as a cowherd in Gokul and Vrindavan situated on the banks of the river Yamuna (a tributary of the Ganges) in the Mathura District of Uttar Pradesh. Thereafter he moved to Dwarka in Gujarat where he ruled for many years until his death.

Lord Krishna was also adored by the Gopis (cowherd girls) of Vrindavan with whom he danced. It is said that he would appear in front of each Gopi serenading each one separately. This was his Ras Lila (Divine play). The most famous of them was Radha who was the beloved of Lord Krishna. The Gopis were enchanted by the sound of Lord Krishna's bansuri (flute) and would dance while he played. Rather than a romantic twist, this was Supreme Bhakti (selfless devotion to God) and the Lord's equal love for all beings.

The Bhagavad Gita, the song of Bhagavan (God), the Hindu scriptures, was relayed by Lord Krishna via a conversation with Prince Arjun during the battle of Kurukshetra in the epic The Mahabharata. The Gita provides us with the teachings of Lord Krishna in particular the philosophy of karma. Kurukshetra is situated in the state of Haryana.

My Krishna Yatra would consist of  Gokul - Vrindavan - Mathura - Dwarka - Kurukshetra. But more than the worshipping part of the Yatra, my aim is to feel the spirits in the air, to hear the mesmerising sound of His bansuri (flute) and imagine the ras lila, to hear the comforting words of the Lord reassuring Arjun that He would return from age to age to protect the righteous, annihilate evil and re-establish dharma (right thought speech, action and duty).

And hopefully being there will transport me to that the time and place when my God walked the earth. 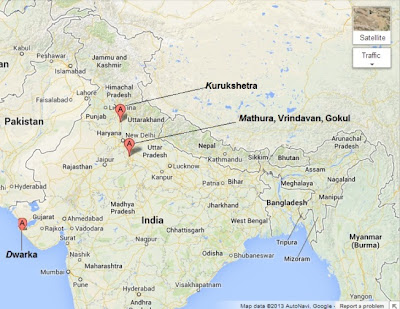 from Google maps - all places are approximate 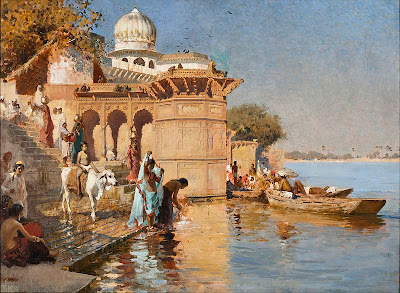 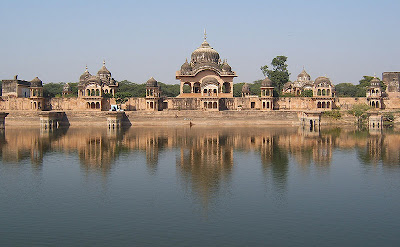 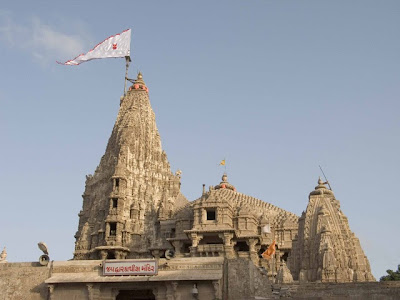 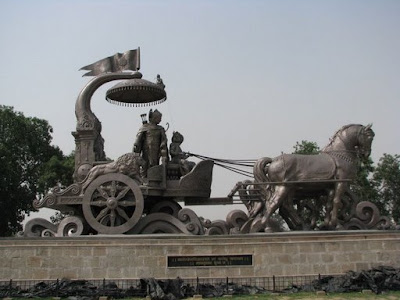 For the protection of the good, for the annihilation of evil and to re-establish righteousness, I appear millennium after millennium.

Join me tomorrow on my second journey. 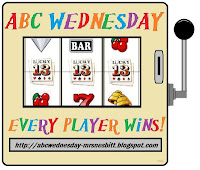