The family I was born into was forward thinking and open minded. But expressing love for each other was rarely done with words.

And actually words were unnecessary because the love we had for each other we showed in our respect for each other, politeness, tolerance, in the times we spent together, in the joy on our faces when we were in each other's company and the laughter that rang through our home. .

I miss those times and those who have crossed over . But most of all I miss my dad.

I was very close to my dad, and he was one of the most beautiful souls I have ever known.

In the last 15 years of his life, he lost 98% of his hearing,  and though we communicated with words he probably heard very little. Yet his love showed through in the breakfast he made for me, the cup of tea in the afternoon, the food he would heat up for me knowing I was tired, in the letters he happily mailed for me, the cake that he bought for my birthday, or in the smile I was greeted with after a hard day at work.

Just sitting quietly by his side gave me comfort and strength.

In the last hours of his life in the hospital there were no words exchanged  yet I watched his soul struggle between a better world and the love he had for us. And I know my hand on his forehead and my head next to his told him how much I loved him.

I miss my dad.

No need for words to express love.


Please read my poem "Ode To My Dad" that I wrote a few years ago.

This post is written for:
#FridayReflections - Write about someone you miss dearly,
#SoCS - Stream of Consciousness - just writing no editing - prompt  = a word that begins or ends with "press"

Zooming Into The Soul #SOCS #FridayReflections 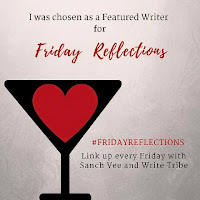 I intended to write on random acts of kindness but my stream of consciousness is taking me into quite a different direction.

The year was 1997.  Elaine was late for her training course. Her colleague Gary held the lift open for her while reminding her to hurry. Elaine rushed in noticing a stranger standing at the back of the lift. She gave him a fleeting glance but something about him felt familiar. She turned away from him and frowned not understanding why she felt that way and because that feeling made her uncomfortable.

Riley watched the flustered Elaine. There was something refreshing about the way she rushed in with not a care in the world of what she looked like, a big smile and a breathless sorry escaping her lips. He couldn't take his eyes off her.

Elaine and Gary got on the bus together not noticing that Riley was on the bus too. Riley got the last seat opposite Elaine. As she looked around, her eyes suddenly met Riley's. For a moment or two their eyes locked and a faint smile crossed their lips. Elaine turned to look out of the window but the pull to watch Riley was too strong. Their eyes met and locked again.  Riley felt a stirring in his soul, as if he had seen those dark eyes before and looking at her made him happy. Riley's brown eyes mesmerised Elaine. Naturally shy, looking into the eyes of a stranger was completely out of character for her yet she could not tear her eyes away from his.

Elaine was surprised to see Riley at the course. Over the next few days, their friendship grew. There was an ease and comfort between them and being in each other's company made them feel blissful. But social norms prevented friendship from turning into a relationship and neither ever crossed that line. Perhaps in another time and place things may have been different.

But who can break the bonds that are made by souls. And who knows how, where, when and why a soul connects with you at a level that is beyond human comprehension.

Elaine and Riley continue to remain friends though their interaction these days is few and far between. But I have no doubts at all that when their journeys on Earth are over, they will connect again on the other side and recall that moment when they both were zooming into each other's souls. 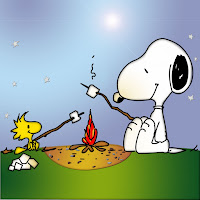 Written for:
#FridayReflections - 2 people seeing each other and making eye contact for the first time.
#SoCS - Stream of consciousness - just writing no editing - word containing "zoo"