There was a time when I could have confidently said I am a morning person. Getting up early in the morning was a piece of cake but staying up late at night was a Herculean task.

But now I no longer know as I seem to do both with ease or not just depends on the time of year. In Winter waking up early and staying up late seems near impossible. Yet in Summer my eyes open up before the alarm goes off and sleep eludes me until late at night.

Perhaps my body is tuned in to circadian rhythms or perhaps I was a bear in a previous life. I think bears have got it right; hibernating in Winter seems like the perfect thing to do.

So what's the time Mr Wolf?  Share your time of day.

Linking to:
#MondayMusings
#MicroblogMonday
I Must Confess
Open Slather

You've Got Snail Mail is the BlogARhythm Challenge that some bloggers took part in. And it's about time I wrote my post on my experience with this.

With technology taking over communications in the form of email, texting, snapchatting, FB, WhatsApp, Twitter etc, the handwritten note is become a thing of the past. And yet a handwritten note just seems to have that extra touch of personal.

It was truly special sending a handwritten letter to Pooja who blogs at Second Thoughts First and receiving a one from Vidya who is going a-musing and collecting smiles on her blog.

The story behind sending the letter:

It took me a while to send off a letter, not because I was lazy or put it on the back burner but because I wanted the letter to mean something for me and I wanted it to be special for Pooja. And I'm so glad that I didn't push myself to simply write a letter but waited for that perfect moment because had I not gone with the flow, I would not have shared a special moment with Pooja.

So on the morning of July 9 I opened up the curtains and the hills took my breath away. And as always I made a quick dive for my camera and captured that moment. Then while taking a short break at work from a rather hectic day, suddenly the words of my letter to Pooja streamed through my head and so I wrote to her that day to share my moment of wonder. 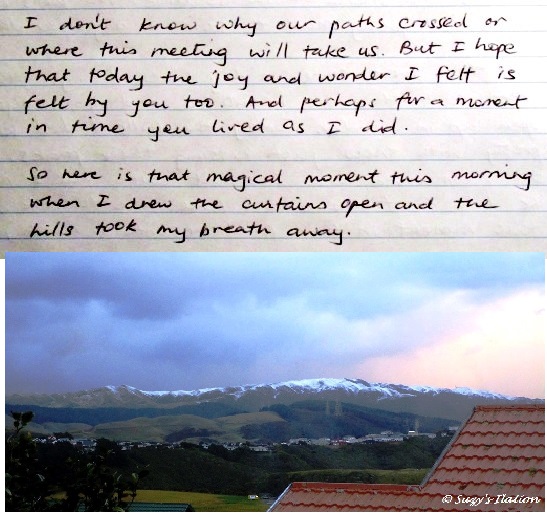 sharing a bit of my letter with all of you


The story behind receiving a letter:

Vidya sent her letter off to me on July 12 and it is still travelling around somewhere in the world. The letter is obviously destined to see the world before it arrives! I'm not surprised as letters to New Zealand often go on a trip around the world. It will eventually get here and it will be fun to see the route it took. Anyway Vidya was kind enough to write me a letter again and emailed it to me some days ago that I was so thrilled to receive and read.

Vidya has such nice handwriting and I felt so connected to her letter as if we've known each other for many many years.  So here are some excerpts from Vidya's letter 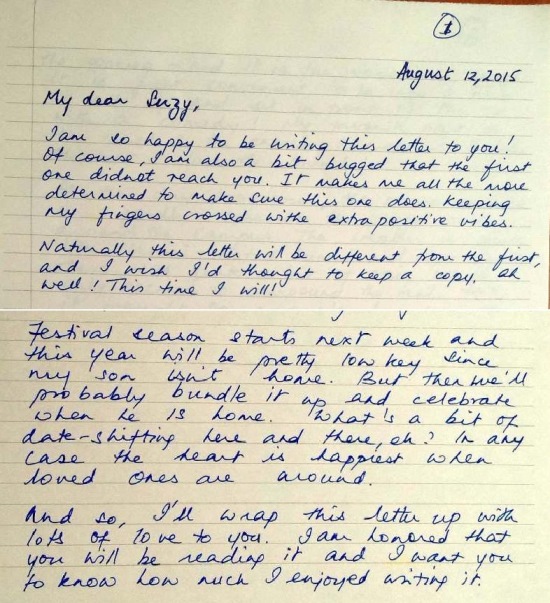 I had such a smile when I read the paragraph about the festivals and I couldn't help thinking great minds think alike.  My daughter was unable to drop by for Raksha Bandhan as she was working so I told my son we would celebrate when she comes over in the future. So true Vidya, what's a little date shifting here and there.

I truly believe that nothing happens by chance and that our paths cross for a reason; sometimes to bring us joy, sometimes to teach us something. Often the reasons are not clear, often unknown. Some paths cross for a fleeting moment and never meet again and some linger for a while longer. - taken from my letter to Pooja.

Pooja and Vidya were not random selections for me and I hope that these connections linger for a long long time.

On a side note, I enjoyed this so much that I've decided to hand write letters to bring in that personal touch and then email them  - you know preserve the past yet move with the times.

Have you ever sent or received snail mail? Do share your snail mail stories.

Greetings from my home again.

I thought I would go back to my postcards from around the world today, but another thought presented itself and I hope that it will inspire at least one person.

Today I gave a reference check for someone for a job and just this morning I was thinking about which recruitment agent I should contact as I am also on the lookout for a new role.

Just before the recruitment agent said goodbye a thought suddenly entered my mind - perhaps this was the answer to the question I posed this morning. And so I had a chat and sent off my CV. Will this be fruitful? I don't know but I live in hope and have the faith,


When an opportunity presents itself, cease it with both hands.

You never know where it may lead. 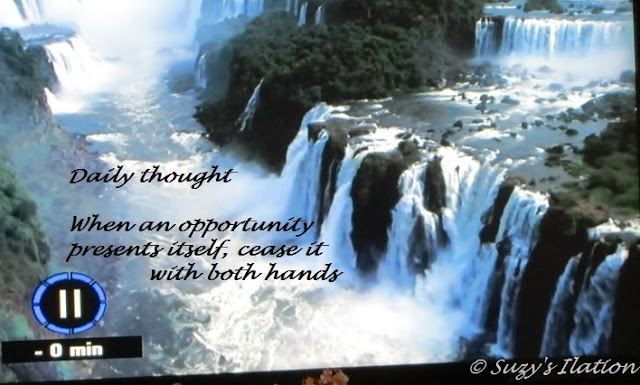 Greetings from my home.

Thought I would change track for today.

I've read many posts on hope and faith today and as I went through them the following words came to mind: 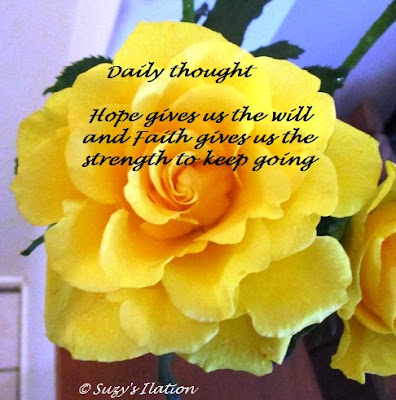 Linking to #MondayMusings. Today we have been asked to ponder on a mission statement for our blogs.  Here's mine that I've had for a while now

My blogs are a reflection of these. I share the insights of my soul and my dreams through my blog Someday Somewhere (this blog), my poems at Reflections of my Soul  and my photos at Photos are Fun.

Greetings from Rotorua the "hot" spot in New Zealand, city of boiling mud pools and geysers.

Rotorua is the short name of Te Rotorua-nui-a-Kahumatamomoe, "The second great lake of Kahumatamomoe") and the Pohutu Geyser is New Zealand's answer to the Old Faithful in USA.

It erupts up to twenty times per day and can reach heights of up to 30 metres (100 feet), quite spectacular to watch particularly when you stand on the bridge. I was lucky that we were there are the right time and watched this spectacular moment both from the bridge and from afar.

The Pohutu Geyser is situated in the geothermal area of Te Whakarewarewatanga O Te Ope Taua A Wahiao, meaning The gathering place for the war parties of Wahiao, Try that for a tongue twister! 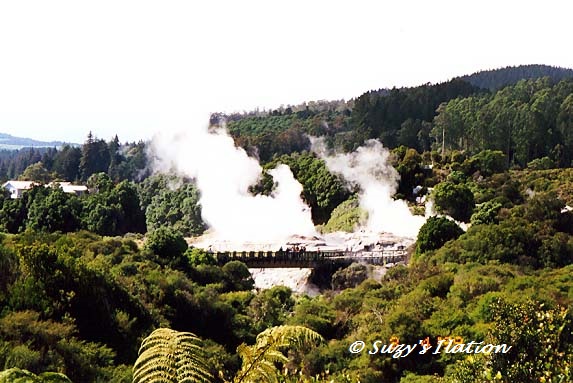 Greetings from Dunedin.
It is the second largest city of the South Island and one of the four main cities of New Zealand.
The Maori name for Dunedin is Ōtepoti, meaning the place of steep points.
Like Wellington, Dunedin is a very picturesque city with spectacular scenery. It is my 2nd favourite New Zealand city after Wellington.
By and large Dunedin is considered the University City as it is home to Otago University.
Dunedin claims it has the steepest street in the world - Baldwin street (see picture),  Glad I didn't have to climb it. On the other hand, I would be pretty fit if I had to climb it everyday. And imagine if you had to sit your driving test on that street! 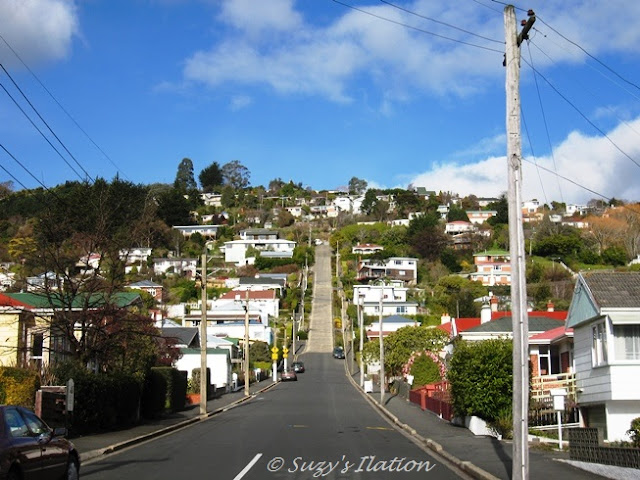 Postcards from around the world for the #SeptemberChallenge hosted by Everyday Gyaan.

Greetings from Auckland, New Zealand's largest city.
Auckland is also known as the City of Sails and its Maori name is Tāmaki-makau-rau (Tāmaki of a hundred lovers)
They Sky Tower is one of Auckland's key attractions and the tallest man made tower in the Southern Hemisphere.
Not as picturesque as Wellington but Auckland has big city charm.
Oh and in case you are wondering what Wellington's Maori name is, it is Te Whanganui-a-Tara (the great harbour of Tara) - now updated on my Wellington postcard. 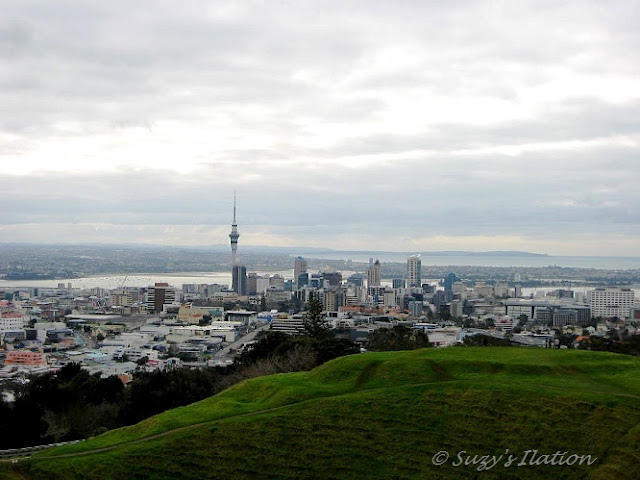 My theme is postcards from around the world and this week I will start with New Zealand.

Greetings from Wellington the capital city of New Zealand.
It's one of the most beautiful cities I have ever seen.
And wherever you go, you get to see spectacular scenery.
I still remember the day I landed in Wellington.
It looked so beautiful from the plane.
Wellington is known as Windy Wellington and Coffee Capital because there's a cafe at almost every corner.
Wellington's Maori name is Te Whanganui-a-Tara (the great harbour of Tara) 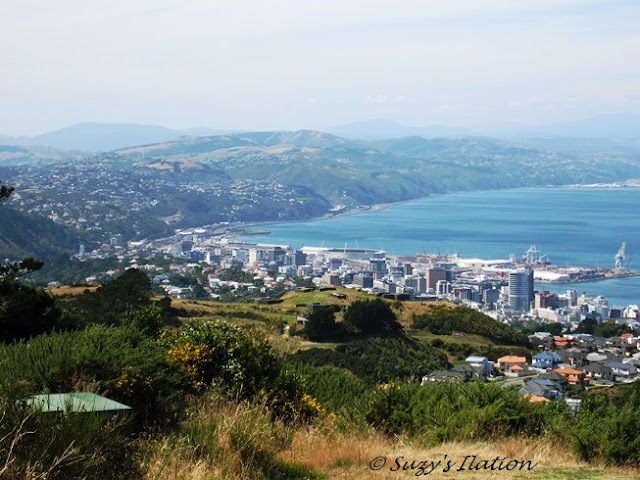