A quick run-down of 7 things that stood out in the last fortnight.

1. Rugby is the talk of the fortnight. Rugby fever is everywhere. Watched the semi finals of the Rugby
World cup and now look forward to the finals tonight France vs New Zealand. Go the NZ All Blacks.
I guess you wonder why there are so many rugby posts lately. It is New Zealand's national game and
the NZ All Blacks are the world's number 1 team for many years. NZ is hosting the Rugby World Cup
such a thrill for us and we feel so privileged to be part of such a large event.
From Wikipedia Rugby World Cup
The tournament (rugby world cup) is one of the largest international sporting events in the world,
surpassed in scale only by the FIFA World Cup, the Olympics and the Tour de France.

2.  Walked around my city with a camera. Quite amazing what you see in your own city when you go
looking for interesting things to photograph. Will post the pics on my Photos are Fun blog.

3.  Watched an interesting documentary on TV on the History Channel - 101 gadgets of the century -
things that have changed the way we do things. Here are the top five:
1. Smartphone   2. Short wave Radio   3. Television   4.  Hypodermic needle   5. Personal Computer
Quite amazing that 4 of the 5 are communication / media related.

4.  Had to go to the hospital for an emergency eye check for a suspected retina detachment or as my GP
put it to me, to rule it out. Thank God that we could rule it out. My eye is healthy and normal.
I had a nervous week. So relieved now.

5.  Went to the movies and dinner with some girlfriends last night. We watched Johnny English Reborn.
It was a laugh a minute. Rowan Atkinson did a great job of acting silly.  I think it must be so hard
to act silly with a straight face. After the movie we had a Thai meal. I'm not a fan of Thai food but
it was a pretty good meal. The meal was very large ... next time I'll skip the mains and do the entrees.
They sounded yummier anyway!

6.  Organised a party for my mother's 75th birthday. We're celebrating next week. I wanted it to be a
surprise party but knowing my mother, she'll probably organise to go out and she'll be too stressed
with a surprise party so thought it would be best to tell her.  She's happy and looking forward to it.
We're also going to celebrate my daughter's birthday - but she doesn't know that yet so a big surprise
for her.

7.  I've been doing a lot of reading this fortnight - mostly blogs. Found so many blog parties - I didn't
even know such things existed. Amazing what you learn everyday. Check out the blog parties I
currently link to on the Blog Parties tab.

Hope all of you had an awesome fortnight. Please share your 7 snippets. 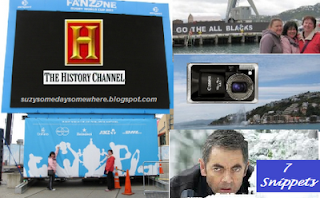 Email ThisBlogThis!Share to TwitterShare to FacebookShare to Pinterest
Labels: Seven Snippets, Snapshot of my week