"At the stroke of the midnight hour when the world slept, India awoke to life and freedom" (Adapted from the speech by Jawaharlal Nehru on the eve of India's Independence)

15th August 1947, the Indian flag flew for the first time and the people of India rejoiced.

But what of the ones who worked quietly behind the scenes, the silent and forgotten heroes, the forgotten freedom fighters? Without them India would not have awoken to life and freedom.

My grandmother was one of them. Read her biography here and here for more details.

At 5 feet tall, gentle and demure, respectful and soft spoken, graceful and loving, kind, compassionate and humble, pious and dharmic (one who follows the path of right action, speech and thought), she looked like a little wisp of a lady who lived a simple life according to the precepts of the Gita (holy book of the Hindus), but she was a formidable power, with a great strength of character and mind, a leader and the ultimate diplomat. She commanded respect wherever she went.

Post Independence she was dragged into politics and became a member of the first Lok Sabha (House of Commons) of India. While in Parliament, she introduced the following bills:

And she strongly opposed the bill to punish unfaithful wives with her famous speech in Parliament "In a society where we have such evil customs as child marriages permitting a girl of ten or twelve to be married to a man of forty or fifty, old enough to be her grandfather, how can we expect her to be loyal? In a society where girls are at times sold as slaves by her own parents, how can they be expected to be faithful to their husbands?"  The bill was withdrawn.

After her term in Parliament was over, she did not contest again and instead dedicated her life to humanitarian services, to the upliftment of the poor and oppressed particularly women and children. For her, service to humanity was service to God.

She was a founder member of the Bhagini Samaj an organisation dedicated to the welfare of women and children and started the Adivasi Welfare Centre in Udvada, Gujarat for women and children providing education and training. She introduced the adoption of villages a UNICEF approved programme and she was the first recipient of the prestigious Jamnalal Bajaj Award for her outstanding services to humanity. She donated her entire award to the the Adivasi Centre.

She was also a Justice of Peace.

But to me she was Dadima (Paternal grandmother), an inspirational, exceptional and beautiful human being who left her family a legacy rich in culture and heritage. Who taught us all, through her life, the meaning of love.

My late father and I were at her side when she breathed her last on the 28th of August 1985. Graceful and respectful even in death, she joined her hands together in Namaste to my dad and me, looked heavenward, and with the words "Hey Ram" (Oh God) she passed over peacefully and quietly to the other side. Be at peace Dadima.

I hope someday my destiny will also lead me in service to humanity. 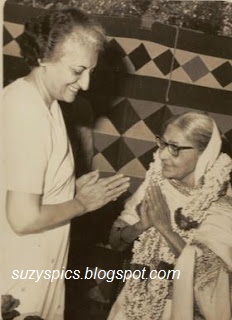 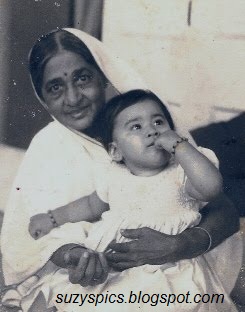 pic 1: receiving her award from the then Prime Minister of India, Indira Gandhi, 1980
pic 2: Dadima and me circa 1962


Be inspired, stay inspired, inspire change, be the change!


“I’m celebrating Women’s History Month and International Women’s Day by blogging for the #WomenInspire Campaign sponsored by USC’s masters degree in social work program. Join the blog carnival to honor a woman who has inspired you!”


Drop by my facebook page Suzy's Ilation and if any of your posts needs some tlc, leave a link there and I'll drop by and give it some love.