Having done a Krishna and Ram Yatra, my third journey will of course be a Shiva Yatra (pilgrimage or journey). 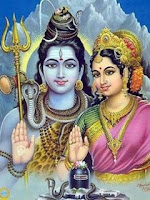 
Lord Shiva is one of the Supreme Gods in the Hindu religion and is considered the God of Destruction. The concept of destruction often makes him a God to fear but he is a very misunderstood God as He is also very benevolent and supposedly easy to please. (What would I know, the Gods never seem to hear me!)

Lord Shiva is also known as Mahadev (Great God) and while he does have many benevolent forms, he also has fearsome forms (known as his Rudra roop).

Lord Shiva supposedly creates the Universe and destroys it both via his cosmic dance the Tandava. The Ananda Tandava creates and the Rudra Tandava destroys.

There are many temples and holy places in India dedicated to Lord Shiva, but my Shiva Yatra would consist of Varanasi (Kashi) - Allahabad - Rishikesh - Hardwar - Trimbakeshwar - Somnath 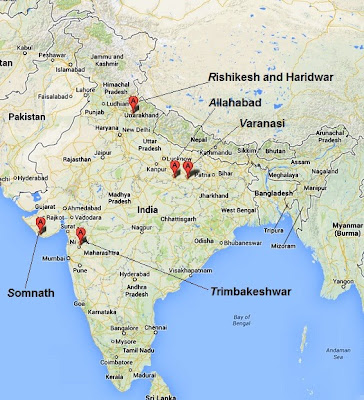 google maps - all places are approximate


Varanasi (aka Benaras and Kashi) is considered the holiest place in India. It is situated on the banks of the river Ganges in Uttar Pradesh and was supposedly created by Lord Shiva after the death of his first wife Sati. 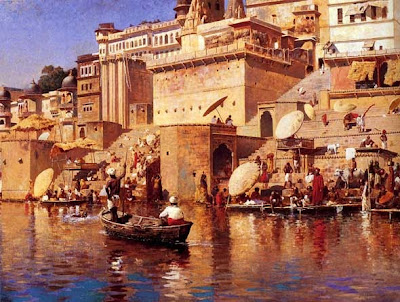 Allahabad's original name was Prayaga (place of offerings) and is referred to as Triveni Sangam (confluence of the rivers Ganges, Yamuna and the legendary Saraswati). The Prayag Shrine is considered to be one of the Shakti Peeth's. When Sati died, Shiva was devastated and carried her body as he wandered around. Parts of it fell and these places are known as Shakti Peeths. These Peeths are considered very holy and powerful as they are also the union of Shiv and Shakti (Sati). 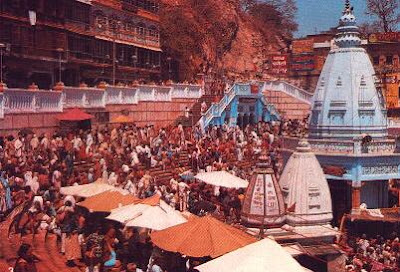 Hardwar situated on the banks of the river Ganges in Uttarkhand is known as the Gateway to Lord Shiva and is one of the 7 holiest places in India. It is considered to be the hometown of Sati and one of the places where drops of Amrit (elixir of life) accidentally slipped from the pitcher being carried by the Lord Vishnu's celestial bird Garuda. Hardwar is also considered to contain the footsteps of Shiva. 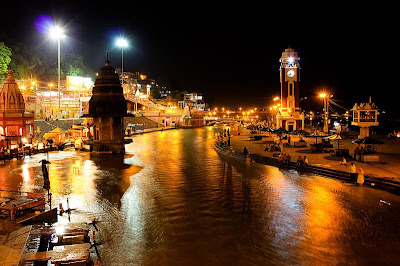 Rishikesh - I include this under the Shiva Yatra as this is so close to Hardwar. Rishikesh is also considered to be one of the holy places in India and is associated more with Lord Ram who was supposed to have meditated here on his life's purpose. Not sure now with the recent floods if this place is safe to visit. 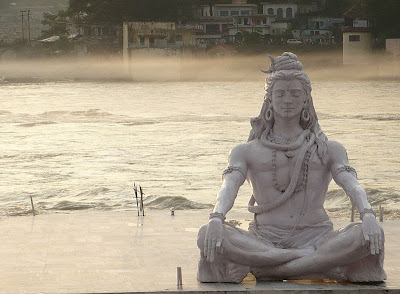 Somnath Temple near Veraval in Gujarat is one of the 12 Jyotirlinga shrines of Lord Shiva. Jyotirlinga are shrines where it is believed Lord Shiva manifested and revealed himself as a column of light (Jyoti - light) to his devotees. Somnath means "The protector of the Moon God". It is believed that at Somnath Lord Shiva absorbed the curse placed on the Moon God and hence He wears the crescent moon on his head. 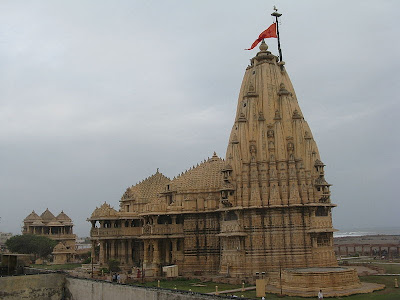 
Trimbakeshwar Temple situated in the Nashik district of Maharashtra on the banks of the Godavari river is also one of the 12 Jyotirlinga shrines. While all other Jyotirlingas have Lord Shiva as it's deity, Trimabeshwar has the faces of the Tridev (3 Gods), Lord Brahma (the creator), Lord Vishnu (the sustainer) and Lord Shiva (the destroyer). 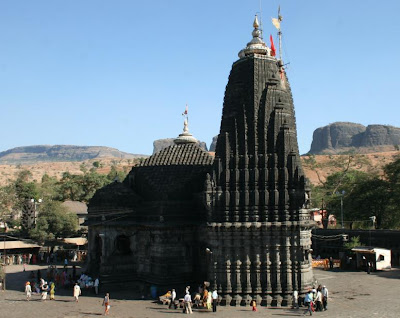 
Join me tomorrow on my fourth journey.


Day 2 posts that I enjoyed
Mahabore's Surpanakha's lust for Rama  - from the Ramayana - how could I not enjoy this one.
Susan's 7 memories of her dad - a very sweet and touching post, a wonderful tribute to her dad.


Have a wonderful day.